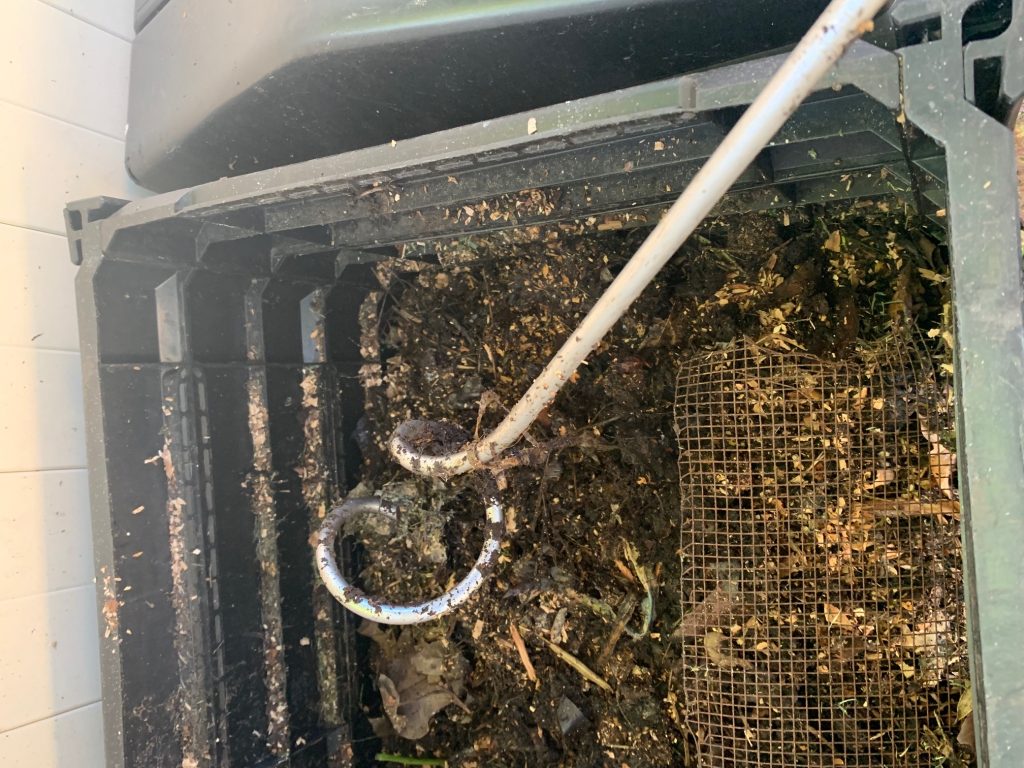 I am not a newbie composter. Oh, no. This is my fifth year composting. Though you can read about my first composting disaster here. I’ve honed my methods, sourced a variety of carbons, and invested in a wood chipper to yield compost so rich and dark it would make any composter swoon. Nevertheless, I made a few fatal errors that produced a truly horrific composting problem in many ways worse than the first!

Look at this beautiful compost I made: 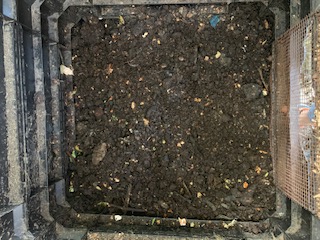 I love composting and really got the right balance of greens to carbons. My equipment is simple: a compost bin (Allgreen Soil Saver Classic Compost Bin) with a corkscrew tool (Lotech Compost Crank Twist Aerator) to aerate it, both which work extremely well. I bought this wood chipper (Sun Joe CJ602E 15-Amp Electric Wood Chipper/Shredder) earlier this year, and wood chips are a very effective source of carbon to add to a compost bin.

The problem was, I wanted more, more, more. I got greedy.

Trying to game the system

One issue about composting is that the rate at which you can produce compost decreases as the weather cools. Here in the Northeast (Brooklyn, to be exact), we typically have until mid September to speedily produce compost at the rate of five weeks from start to finish.

If you keep adding and turning, at some point, the added greens and carbons will slow down their processing and in the spring, you won’t have a full bin of totally done compost.

My idea was to add greens and carbons to my main bin until the beginning of August, but not add any more to it through September and end up with totally finished compost, ready for spring.

Meanwhile, (and here’s the where the grave error comes in), start a new bin for new greens and carbons, turn it through September and then add it on top of the original bin and let it sit through the winter. This would allow the finished compost to remain unincorporated with new, and available to be removed through the bottom hatch.

What could possibly go wrong?

A compost bin needs only a few things to be effective. The first is an area where it can be contained. This can take the form of a pile, a fenced in area, or a bin of sorts. The second requirement is air – some sort of way for air to get in to the pile to help the composting process along.

So, I bought a 20 gallon simple trash can and drilled many holes in it. A very inexpensive, DIY way to create a compost bin, don’t you think? It has the two requirements – an area to contain it, inside the bin, and air holes. 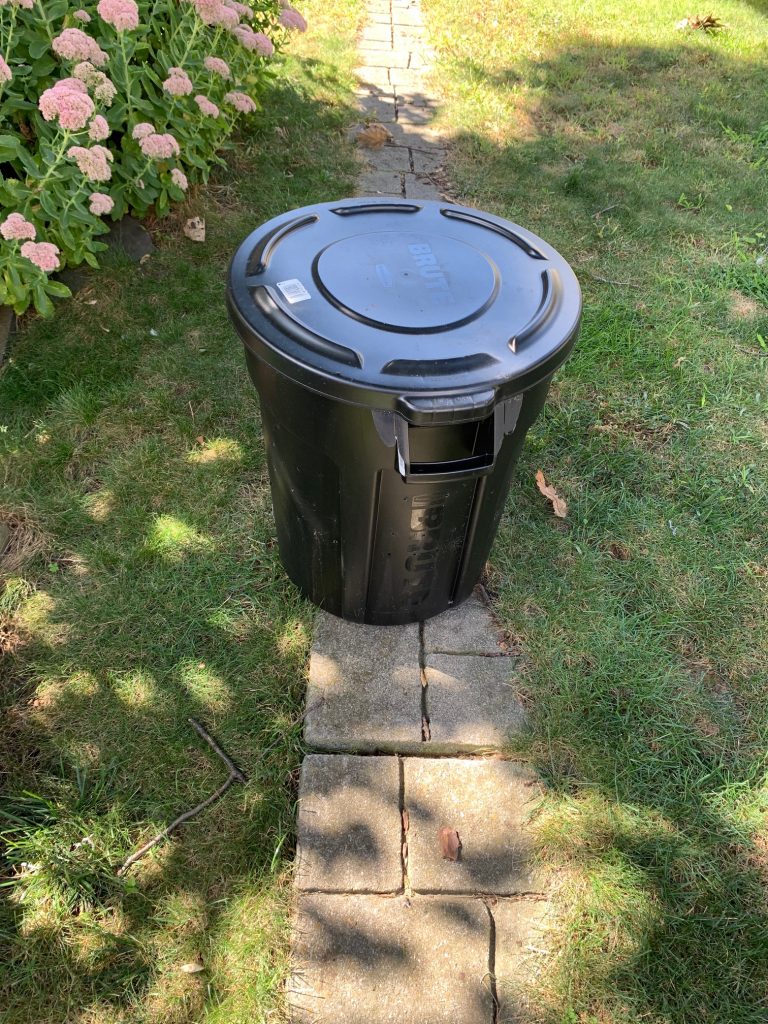 Everything was going as planned for about three weeks. I was adding greens and carbons, doing a little mixing here and there, and everything looked and smelled as expected.

By the fourth week, I went outside and noticed a very foul odor and a large swarm of flies. The smell is something I am not sure I can describe. Well, you can probably imagine in the hot summer, if you pass a particularly bad smelling garbage can, this might give you some idea. One hell of a compost problem.

Except in this case, the garbage can was full. It smelled exactly like you might imagine a garbage can might smell if you filled it up with kitchen scraps and left it for three weeks. 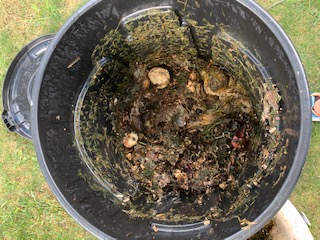 Which is exactly what I had done.

There was no “composting” happening. This was just a whole lotta garbage sitting in the sun, stinking up the yard!

I’m not sure I am doing the smell justice. It was way, way worse than a trash can sitting in the sun. Really, the most nauseating smell I’ve ever smelled.

I quickly realized the critical error I had made: as the bin filled up, the air holes became clogged with compost.

The bin had gone from aerobic to anaerobic, starting a downward spiral. To compound the problem, as I had only drilled holes in the sides, there was no drainage. As I investigated the problem, I noticed under the “compost” (or rather, rotting kitchen scraps, let’s be honest), was a pool of highly concentrated, extremely pungent liquid collecting in the bottom. 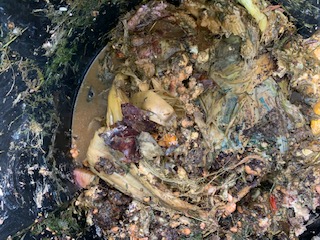 Sorry, I know this is a disgusting picture. Keep scrolling!

There is NO WAY my neighbors on all three sides were not thoroughly besieged by foul odor, and during the best days of the waning summer!

I can only hope that they could not pinpoint the source of the smell, but alas, I am kidding myself. They probably say: there goes Nicole, the lady with the horrible stinking trash can in her backyard.

The dirtiest task (to make everything better again)

I had a couple of choices of how to fix this situation. One, buy a big box of trash bags and just double or triple bag the contents of the bin and wash my hands (several times) of it. Or two, try to get the smelly substance somehow composting again.

As one of the reasons I compost is to reduce my contribution to landfills, the idea of bagging four weeks of scraps and putting them in a landfill seemed like an even worst conclusion to my composting problem. So, I rolled up my sleeves, and with flies swarming around, and with a nose full of noxious fumes, I went about correcting my error.

First, I put a garbage bag under the bin, and drilled holes all along the bottom to drain the liquid. Yeah, it was super gross. 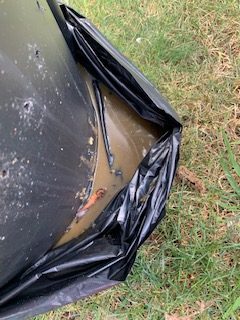 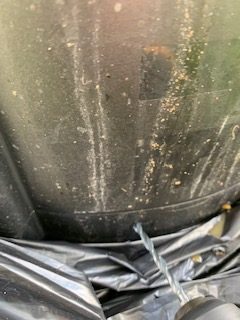 This liquid I figured I had to bag up and throw out as I feared putting it down the outside drain would stink up my whole house, and dumping it in the yard would perpetuate the odorous assault on the neighbors.

Next, I knew I had to incorporate a ton of carbons into the sludge and turn it as to introduce air to eliminate my composting problem. I mixed a lot of dry leaves and wood chips. However, the contents remained very, very wet. I put the lid back on called it a day. 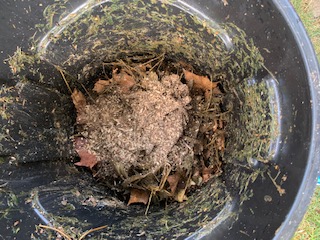 I had to remove all my clothing and scrub my arms and legs to get the odor off. Wherever a bit of liquid or sludge touched me smelled disgusting. Even the drill I used to drill holes smelled terribly and had to be cleaned. Gross.

Not much had changed in the bin on the second day. I realized the only way to have a shot at turning this into compost was to incorporate it into my main, open bottomed, nicely aerated bin on top of my mostly finished compost.

I readied a lot more carbon – wood chips, dry leaves and shredded newspaper, and began the process of scooping the sludge out of the trash can and plopping it into the main bin, mixing with carbon as I went. Finally, after about eight buckets full, I was able to hose the trash can down. 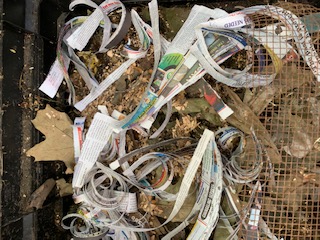 I added more carbons and mixed, leaving a thick layer of wood chips, leaves and paper on top, hoping to mask the odor.

Gradually, a return to normal

On day three, I incorporated the chips on top, mixing well, and putting a layer of leaves on top. The smell was still pretty prevalent.

On day four, I mixed in the leaves I had left on top on day three, and noticed the temperature of the bin was extremely high. I would guess it was between 120 and 140 degrees. 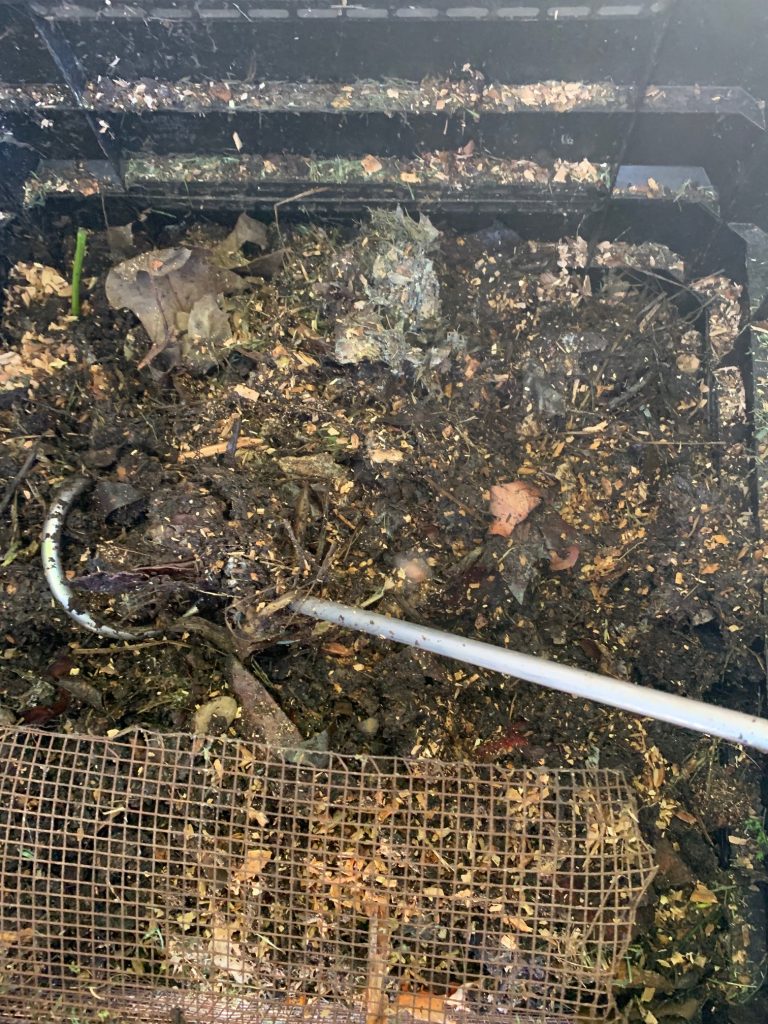 With each turn, steam came up, and the smell had changed from 100% putrid to 90% earthy, 10% putrid. A drastic improvement. Now we were getting somewhere!

The good news, fairly soon, the stinky mess will be rich, dark, crumbly compost (but, I’ll never forget that smell). 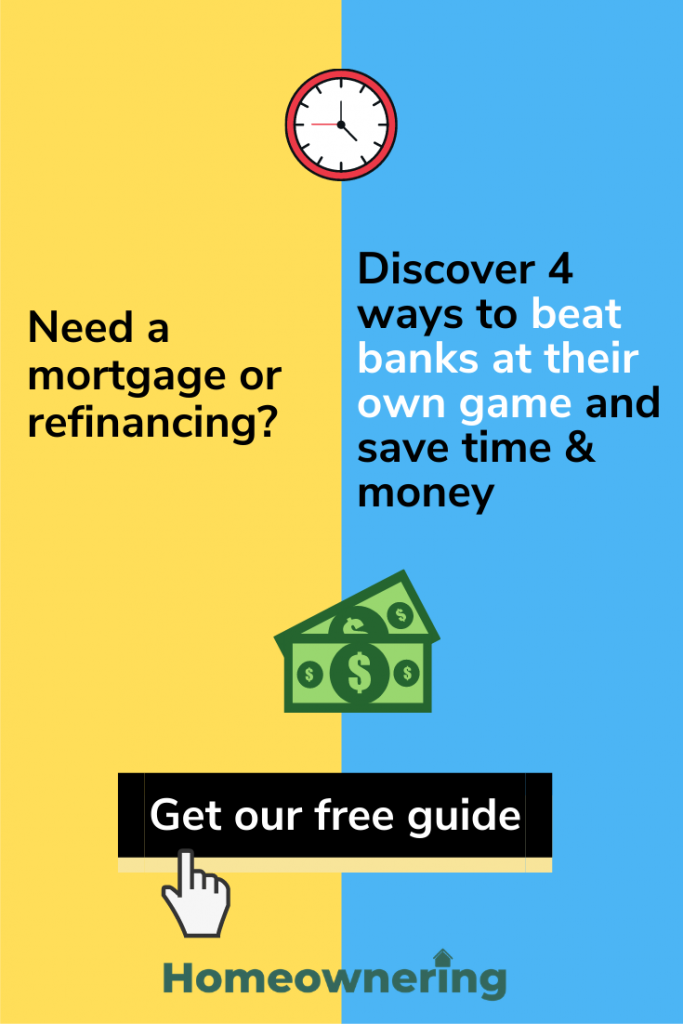